Cancer is a class of diseases characterized by out-of-control cell growth called tumours (except in the case of leukemia). Tumours can grow and interfere with the  digestive, nervous, and circulatory systems and they can release hormones that alter body function. Tumours that stay in one spot and demonstrate limited growth are generally considered to be benign.Malignant tumours are formed when cancerous cell destroys healthy tissue in body (invasion) or when they divide and grow, making new blood vessels to feed itself (angiogenesis).

Cancer is the result of uncontrollable cell growth. Normal cells in the body follow an orderly path of growth, division, and death. Unlike regular cells, cancer cells do not experience programmatic death and instead continue to grow and divide. This leads to a mass of abnormal cells that grows out of control. 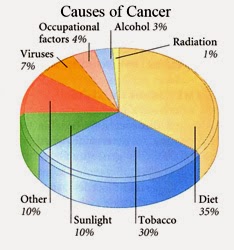 Symptoms
Diagnosis
Early detection of cancer can greatly increase the odds of successful treatment and survival. Physicians use information from symptoms and several other procedures to diagnose cancer.The treatment is based on certain characteristics such as, the type of cancer, the stage of the cancer, age, health status, and additional personal characteristics. Treatments usually fall into one of the following categories: surgery, radiation, chemotherapy, immunotherapy, hormone therapy, or gene therapy.