Bowel cancer starts in the large intestine (colon) or in the rectum (end of colon). Some of the symptoms synonymous with colon cancer include pain the abdomen, change in bowel habits like onset of diarrhea or constipation, blood in stools, anemia, sudden weight loss for no apparent reason. 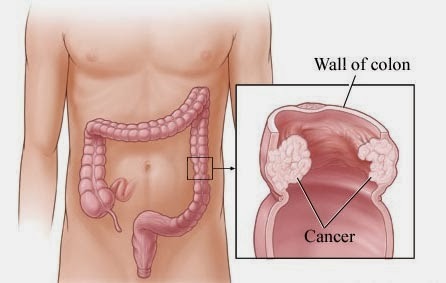 There are many risk factors that are implicated in the development of bowel cancer but faulty lifestyle coupled with improper eating habits have been associated with increased incidence of bowel cancer.
Excessive consumption of processed and red meat (about 5 ounces a day or more), smoking, eating a diet low in fruits and vegetables, sedentary lifestyle are some of the modifiable factors implicated in development of bowel cancer.
There are 4 stages of bowel cancer based on the spread of tumors. It starts in the inner lining of the bowel, if left untreated spreads to the muscle wall in colon then to the lymph nodes and in the terminal stage (stage 4) it enters the bloodstream and spreads to different organs like liver, lungs etc. At this stage it is referred to as metastatic bowel cancer (mCRC)

How Common is Bowel Cancer in the general Population?

Bowel cancer is the 3rd most leading cancer killer worldwide. The incidence of bowel cancer related deaths in India is comparatively low but American Indians who have adopted western lifestyle and dietary pattern show increased incidence. In India, 38,000 new cases of bowel cancer were reported in the year 2008. The number rose to 42,340 by 2012 in India indicating a rising trend back home too. Experts warn against consuming the ‘constipating diet’ which is high in red meat, processed ready – to – eat foods, low in fibrous constituents of the diet like fruits, vegetables, whole grains etc. Deviating from the Indian cereal based diet and adopting a western diet and lifestyle is proving to be deleterious for Indians worldwide.
Nutritionists suggest moderation in red meat consumption and adopting a vegetarian form of diet to prevent bowel cancer.

Can Bowel Cancer be cured?

Bowel cancer is curable if detected early but the probability of cure decreases as the stage advances. It is 90% in the 1st stage and reduces to 30% when detected in the terminal stage i.e. stage 4. Treatment modalities include the use surgery, chemotherapy or radiation therapy.
Novel medicines and surgical procedures have revolutionized cancer treatment. Use of monoclonal antibody drugs and multi – specialty approach to cancer treatment has improved survival rates and quality of lives in patients who have been detected with advanced stage bowel cancer. This has helped customizing cancer treatment according to the biological characteristics of each bowel cancer patient.