Diabetes is a characterised by high levels of sugar in the blood. This may occur due to inadequate insulin production by pancreas or because body cells do not respond to insulin properly or both. The symptoms observed when suffering from diabetes are polyuria (frequent urination), polydipsia (increased thirst) and polyphagia (increased hunger).
Types
There are three types of diabetes:
Type 1 diabetes – The body fails to produce insulin. It is also referred as insulin dependent diabetes or juvenile diabetes as it develops before a person turns 40 years.
Risk Factors
Although the exact cause of type 1 diabetes is unknown, genetic factors likely play a role. Environmental factors, such as exposure to a viral illness, also likely play some role in type 1 diabetes.
The presence of damaging immune system cells that make autoantibodies. Sometimes family members of people with type 1 diabetes are tested for the presence of diabetes autoantibodies. If you have these autoantibodies, you have an increased risk of developing type 1 Diabetes. But, not everyone who has these autoantibodies develops type 1.
Type 2 diabetes – The body does not produce adequate insulin or the body cells fail to respond to the insulin and show a resistance towards it. Approximately 90% of diabetes worldwide is type 2 diabetes. This kind can be controlled with a proper healthy diet, weight management, exercises and monitoring the sugar levels. 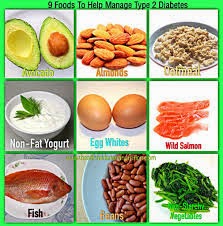 Email ThisBlogThis!Share to TwitterShare to FacebookShare to Pinterest
Labels: Diabetes