Parkinson's disease is a progressive disorder of the nervous system that affects your movement. It develops gradually, sometimes starting with a barely noticeable tremor in just one hand. But while tremor may be the most well-known sign of Parkinson's disease, the disorder also commonly causes stiffness or slowing of movement. 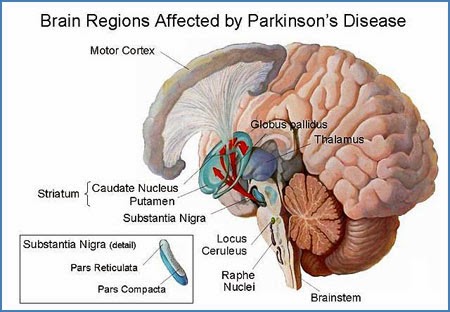 Parkinson's disease symptoms and signs may vary from person to person. Early signs may be mild and may go unnoticed. Symptoms often begin on one side of your body and usually remain worse on that side, even after symptoms begin to affect both sides.
Signs and Symptoms

What is the treatment for Parkinson's disease?
Medications: Medications can help you manage problems with walking, movement and tremor by increasing your brain's supply of dopamine. However, dopamine can't be given directly, as it can't enter your brain.
Deep brain stimulation: In deep brain stimulation (DBS), surgeons implant electrodes into a specific part of your brain. The electrodes are connected to a generator implanted in your chest that sends electrical pulses to your brain and may help improve many of your Parkinson's disease symptoms. Your doctor may adjust your settings as necessary to treat your condition. Surgery may involve risks, including infections, stroke or brain hemorrhage.
Healthy eating:
Sources:WebMd,medicinenet,mayoclinic
Picture