B3 is one of 8 B vitamins. It is also known as niacin (nicotinic acid) and has 2 other forms, niacinamide (nicotinamide) and inositol hexanicotinate, which have different effects from niacin. 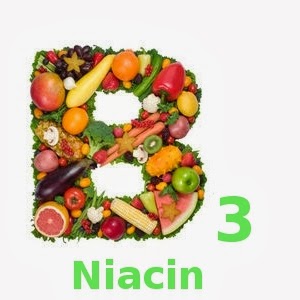 Functions of Vitamin B3 – Niacin

Small amounts of niacin are manufactured in the body from the amino acid tryptophan. To ensure that you are getting enough Vitamin B3 in your diet, be sure to consume a variety of the following foods which are dietary sources of Vitamin B3. 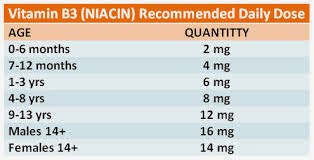 A deficiency of vitamin B3 is rare, due to the widespread enrichment of flours with niacin. However, a deficiency can occur if a person consumes a diet too low in protein. Pellagra is a disease resulting from a niacin deficiency. Pellagra usually occurs due to alcohol abuse, malnutrition, and in those who have multiple nutrient deficiencies.

Who are prone to deficiency

The primary symptoms of Pellagra include:

Email ThisBlogThis!Share to TwitterShare to FacebookShare to Pinterest
Labels: Vitamin B3 (Niacin)