Is there a role for Vitamin D in reducing cancer risk?

A large number of scientific studies have investigated a possible role for vitamin D in cancer prevention.
The first results came from epidemiologic studies known as geographic correlation studies. In these studies, an inverse relationship was found between sunlight exposure levels in a given geographic area and the rates of incidence and death for certain cancers in that area. Individuals living in southern latitudes were found to have lower rates of incidence and death for these cancers than those living at northern latitudes. Because sunlight/UV exposure is necessary for the production of vitamin D3, researchers hypothesized that variation in vitamin D levels accounted for the observed relationships.
Evidence of a possible cancer-protective role for vitamin D has also been found inlaboratory studies of the effect of vitamin D treatment on cancer cells in culture. In these studies, vitamin D promoted the differentiation and death (apoptosis) of cancer cells, and it slowed their proliferation.
Randomized clinical trials designed to investigate the effects of vitamin D intake on bone health have suggested that higher vitamin D intakes may reduce the risk of cancer. One study involved nearly 1,200 healthy post-menopausal women who took daily supplements of calcium (1,400 mg or 1,500 mg) and vitamin D (25 μg vitamin D, or 1,100 IU―a relatively large dose) or a placebo for 4 years. The women who took the supplements had a 60 percent lower overall incidence of cancer; however, the study did not include a vitamin D-only group. Moreover, the primary outcome of the study was fracture incidence; it was not designed to measure cancer incidence. This limits the ability to draw conclusions about the effect of vitamin D intake on cancer risk. 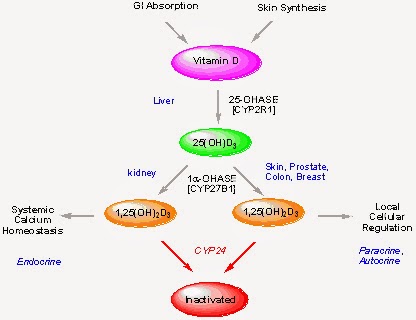 A number of observational studies have investigated whether people with higher vitamin D levels or intake have lower risks of specific cancers, particularly colorectal cancer and breast cancer. Associations of vitamin D with risks of prostate, pancreatic, and other, rarer cancers have also been examined. These studies have yielded inconsistent results, most likely because of the challenges of conducting observational studies of diet . Information about dietary intakes is obtained from the participants through the use of food frequency questionnaires, diet records, or interviews in which the participants are asked to recall information about their dietary intakes. Information collected in this manner can be inaccurate. In addition, only recently has a comprehensive food composition database with vitamin D values for the U.S. food supply become available. Other dietary components orenergy balance may also modify vitamin D metabolism.
Measuring blood levels of 25-hydroxyvitamin D to determine vitamin D status avoids some of the limitations of assessing dietary intake. However, vitamin D levels in the blood vary by race, with the season, and possibly with the activity of genes whose products are involved in vitamin D transport and metabolism. These variations complicate the interpretation of studies that measure the concentration of vitamin D in serum at a single point in time.
Finally, it is difficult to separate the effects of vitamin D and calcium because of the complicated biological interactions between these substances. To fully understand the effect of vitamin D on cancer and other health outcomes, new randomized trials will need to be carried out. However, the appropriate dose of vitamin D to use in such trials is still not clear.