Vitamin E is an antioxidant that protects body tissue from damage caused by substances called free radicals. Free radicals can harm cells, tissues, and organs. They are believed to play a role in certain conditions related to aging. 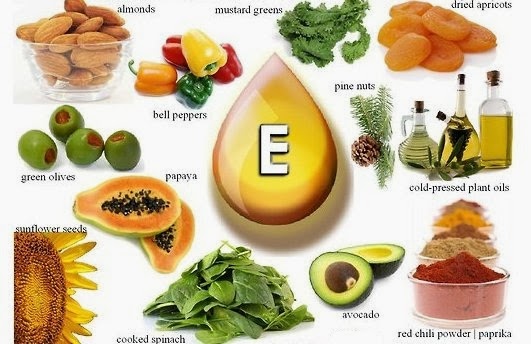 Deficiency
Vitamin E deficiency may occur in two situations: in premature, low birth weight babies and in people who cannot absorb or metabolize fat normally such as people with people with Crohn’s disease, cystic fibrosis, or those who have abetalipoproteinemia  (a disorder which causes poor absorption of dietary fat).
A deficiency of vitamin E can ultimately lead to nervous system problems and damage to nerves. This can result in impaired reflexes, weakness of the muscles, poor balance, and and an inability to coordinate voluntary movements. Vitamin E deficiency may also be a contributing factor to heart disease, including atherosclerosis, and an increased risk of developing some types of cancer.

Symptoms
Excess Vitamin E Symptoms
Prone to Deficiency Occurs
Overdose
The dosage at which vitamin E can cause toxicity is 1000 mg a day, which is 1500 IU aday for natural vitamin E, or 1000 IU a day of synthetic vitamin E. Some side effects have been reported related to large doses of vitamin E (more than 2000 IU), including tiredness, digestive problems, nausea, and headaches.
Dosages of more than 800 IU per day of vitamin E may disrupt the body's blood clotting ability, which could affect people who take blood thinners (anticoagulants)