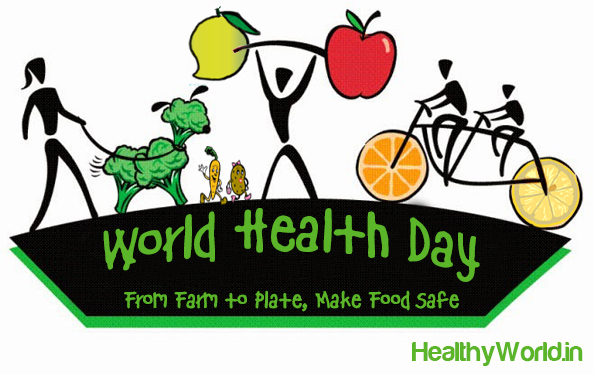 Today, the 7th of April is celebrated worldwide as the ‘World Health Day’ as declared by the boss of all health organizations, the WHO (World Health Organization). This year they've set the theme for the world health day as ‘Food Safety'.

This theme is extremely appropriate in today’s scenario, especially in our country with food contamination being at the peak of a mountain of problems dragging us down. The worst part about the scenario in our country is that it is the small children that are most affected by the contaminated food, take the mid-day meals scam for example where numerous innocent lives were lost because of contaminated food being given to kids at government schools.

But that’s not all, stats show that pregnant women, old people, and people with weak immune systems or those who are suffering from illnesses like diabetes, AIDS etc. When you look at it, a huge chunk of our population is covered by these spheres of people. Food contamination takes place at different levels right from the production at farms, to the slaughtering and harvesting, the packaging and storing and finally the transporting.

A glitch in any of these processes could allow those damn bacteria and viruses to infiltrate our food and affect us even halfway across the globe. Pesticides and chemicals aren't the only way by which food can get contaminated though. You may get the cleanest of food prepared in the most hygienic possible ways, but if you eat it with dirty hands then all the caution goes down the drain.

Did you know that a simple elevator button in your building has 40 times more harmful bacteria than a toilet seat. So if you call the elevator and go straight home with a growling stomach and skip the hand-wash and gobble up a few bites you’re not going to like what you’re consuming.

Reducing food borne illnesses by just 1% every year would stop nearly 100,000 Indians from falling sick every year. And more than 50% of these illnesses can be prevented by washing hands regularly or at least keeping a hand sanitizer in handy. Astounding facts aren’t they? But this is the stark reality and what’s happening in the world around us today.

Storing leftovers in an air tight container could prevent bacteria from entering and contaminating the food, rather than leaving it out in the open covered with a cloth or lid which is most futile.

Cooking is the only practice that destroys bacteria, not freezing. So make sure you cook your food well and kill those sons of guns before they wreak havoc inside you!

Boil kitchen sponges once a week to keep them free from contamination and use clean water for all cooking activities including washing.

Let’s keep our food safe this year and fight contamination the right way to keep harmful bacteria at bay! Remember, Health Is Wealth !!