Can Those Nail Paints & Manicures Cause Cancer? 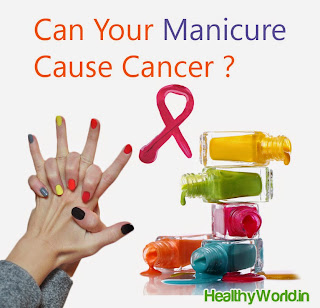 With the rising craze for cool designs on nails, French manicure, nail art among women they think if there is no warning label, it is free of health risks. They are, sadly, mistaken. But beware, the next time you think about changing your nail art more than five times a month, you are exposing yourselves to risk of cancer, warn skin experts.

Nail polishes mainly consist of Nitro Cellulose, which has film-forming properties. Many cheap nail paints have a high amount of toxic substances such as phthalates, toluene and formaldehydes which are dangerous for health.

It's a known truth every woman longs for manicured nails and catchy polishes to make style statement. But with this article we want to draw your attention towards the truth behind those nail polishes and manicures.

Your bottle of nail polish has at least three.

1. Dibutyl phthalate — Used as a solvent for dyes and as a plasticizer to prevent nail polishes from becoming brittle, this phthalate is associated with liver and kidney failure in young children when products (and polished little fingers) containing phthalates are sucked or chewed for extended periods.

3. Toluene — Toluene is a moderate skin irritant that can cause dermatitis with prolonged contact.Inhalation of toluene vapour can affect the central nervous system causing slight drowsiness and headache at low levels and Irritation of the nose, throat and respiratory tract at increased levels.

Does this mean you have to stick to plain nails to stay healthy? Not necessarily! Although it is yet to discover a nail polish that is completely "natural," but you can choose options that are safe for you and the environment.

No one is saying that occasional application of nail polish will cause long-term health consequences". But some researchers have suggested there may be concerns for those who work in nail salons and children, who are particularly susceptible to phthalates like DBP that pose developmental risks.

Manicures have long been a source of controversy with several studies showing that the practice can come with a costly price — skin cancer. But do you have to worry about an increased risk of melanoma at the nail salon too?

The question has come up since the advent of manicures which has become an increasingly popular service for customers seeking longer wearing manicures — it can last up to three weeks.

Technicians apply a special polish to nails and then cure the product, usually for four to eight minutes, using ultraviolet light. That’s the same kind of light that causes sun damage to our skin. “UV lamps of any wattage are like the sun on steroids.

You get boosted UVA/UVB exposure in such a short amount of time,” To limit risk, the study’s authors recommended using sunscreens or UVA protective gloves when getting a gel manicure.

Ladies, beware! Beauty and style is important but not at the cost of your health.